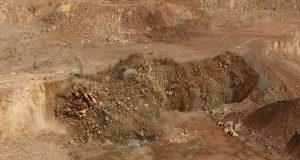 An explosion exerts a pressure impact on the charge chamber walls at levels of 1600 to 15 000 MPa, depending on the type of explosives used. This explosive impulse generates a pressure wave, spreading in all directions. Elastic waves bounce off the free surfaces and the surfaces of natural gaps undergoing reflections and refraction. Stretching stresses make gaps and fractures in the rock, eventually breaking it within the space of the explosive’s effectiveness.
The explosive centre, damaged by gas pressure, is ejected from the rock mass. It forms an action cone, consisting of an ejection cone and a crushing cone with different radius and height values, thus with a different action index.

Firing design
The following factors have to be considered in firing design:
– associated with rock mass, conductibility of sound waves, fracture density, compaction, etc.,
– associated with firing effects: output volume, break-up degree, the geometry of output slide after explosion (the height, the base width),
– associated with a risk of environmental impacts, such as seismic quakes, scatter of rock fragments, sound effects.

We use cookies to ensure that we give you the best experience on our website. If you continue to use this site we will assume that you are happy with it. More about Cookie Policy
Close X
‹ › ×